Mission Santa Cruz was a Spanish mission founded by the Franciscan order in present-day Santa Cruz, California. The mission was founded in 1791 and named for the feast of the Exultation of the Cross, the name that the explorer Gaspar de Portolà gave to the area when he camped on the banks of the San Lorenzo River on October 17, 1769, and erected a wooden cross. As with the other California missions, Mission Santa Cruz served as a site for ecclesiastical conversion of natives, first the Ohlone, the original inhabitants of the region, and later the Yokuts from the east. The settlement was the site of the first autopsy in Alta California.

The current Holy Cross Church was built on the site of the original mission church in 1889, and it remains an active parish of the Diocese of Monterey. A half-size replica of the original mission church was built near the mission site in the 1930s and functions as a chapel of Holy Cross Church. Today’s Plaza Park occupies the same location as the original plaza, at the center of the former Mission complex. The complex at one time included as many as 32 buildings. The only surviving mission building, a dormitory for native acolytes, has been restored to its original appearance and functions as a museum of the Santa Cruz Mission State Historic Park. 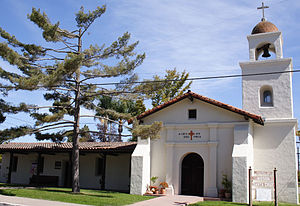